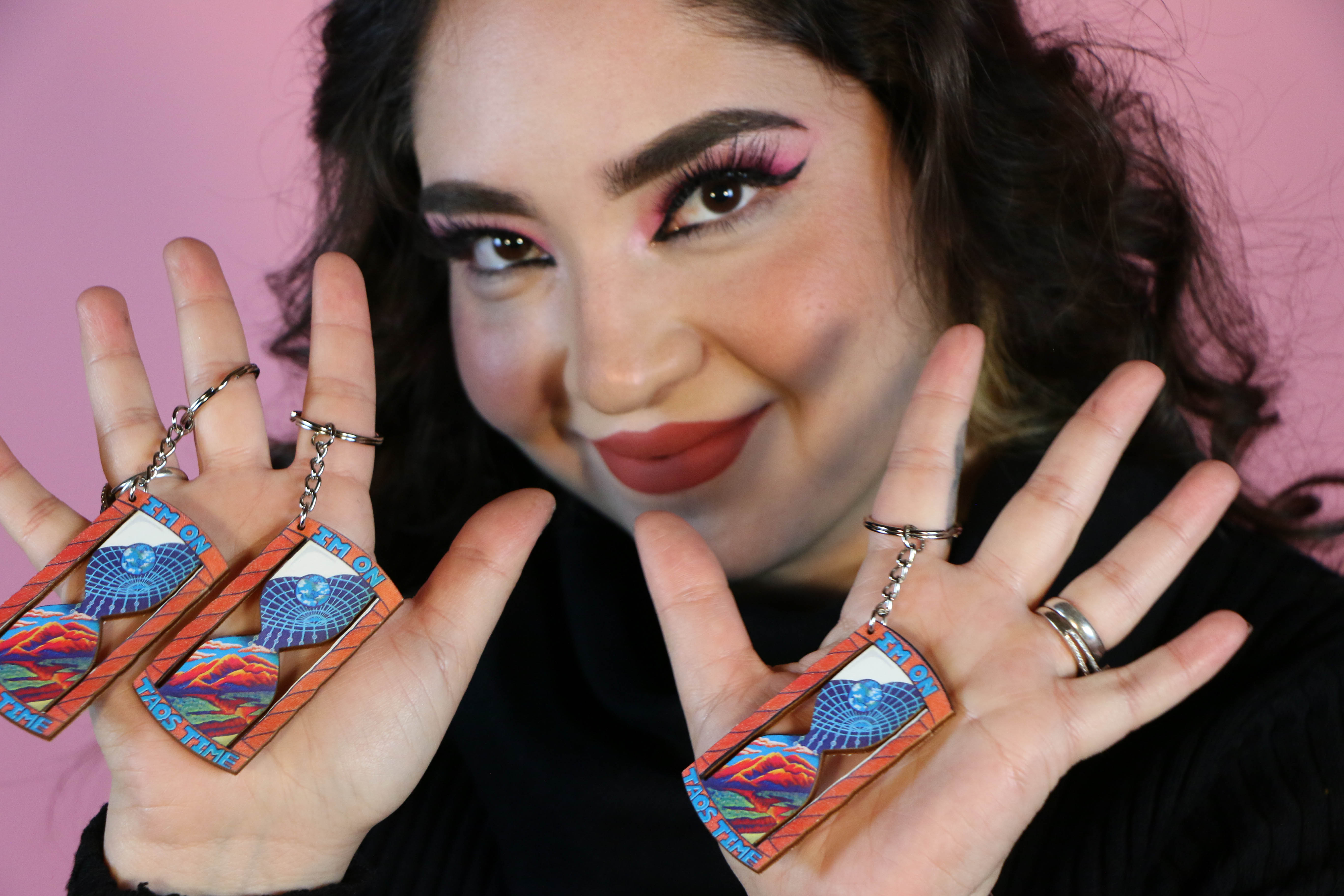 Leeandra Muñoz was born and raised in Taos, New Mexico. She is a painter, does face painting and murals, is a tarot card reader, and has a holistic healing certificate.

What Got Leeandra Started on Art

Leeandra's love for art began long ago in her father's jewelry room - he was also an artist. She would spend a lot of time with her dad working on her art while also working on his jewelry. Unfortunately, Leeandra's dad passed away when she was only 11 years old.

This made her stop creating artwork for a while, and she only resumed after her grandfather passed away shortly after that. She was about1 6 when that fire was rekindled, and it's been apart of who she is ever since. Leeandra had a brief hiatus when she had her son but began Metaphysicalee around June 2019.

How Metaphysicalee Came to Be

Leeandra loves to play creating words with her names, and "Metaphysicalee" came after she received her holistic healing certificate.That?s because Leeandra feels that Metaphysics is a significant part of her life.

The idea of Metaphysicalee is a marriage of Leeandra's art and certificate. A friend commissioned a painting when she was close to graduating, and that was the first piece of art associated with Metaphysicalee.

The idea behind Metaphysicalee stemmed from being urged on by the people close to her. Initially, Leeandra kept the name as an idea but could put it to work during an organized event by a friend. Afterward,the Taos Instagram page saw her work and was moved. They asked her to make something for their sticker pack, and that's when Leeandra came up with "Taos Time." Since then, Metaphysicalee has grown quite nicely.

The Connection Between Art and Leeandra's Family

Leeandra's creativity is inspired by childhood moments spent with her dad. After he died, Leeandra was diagnosed with PTSD, and art played a significant part in helping her through the problem. Similarly, she also used art to console herself from the loss of her grandfather. She has integrated her own mental health and the experience of having PTSD into her art, which is evident in all her projects.

Leeandra's Awareness of Her Gifts and Talents

Surprisingly, Leeandra was somewhat unaware of her talent. She made art without the benefits of formal schooling. She didn't attend any painting or drawing lessons, and she taught herself everything she knows.

After getting her Holistic Certificate, she began to see her art as a practice for self-care. She became more?conscious?with her work and realized how it affected people around her in a positive way. This was when she knew what she wanted to do ? to work not primarily for money but for passion.

According to Leeandra, Metaphysicalee is all about
learning how to channel one's energy better. She incorporates hidden messages into her work and hopes that others can discover their own interpretations of its possible meanings.

Because she?s from Taos, Leeandra loves to include some familiar locations in town alongside more abstract elements. Her philosophy is that those good days can outweigh the bad days, and sharing this would be a satisfying achievement, especially during the pandemic.

Leeandra's Message to Other Artists

Leeandra believes that nothing works better than
following your heart when doing art. It's the best feeling in the world, according to her, as is channeling your energy into things you love doing.

Her Goals for the Coming Year

Lastly, Leeandra is aiming for the top this coming year,2021. Her desire is to climb steeper mountains and push her creativity in the art to new levels.